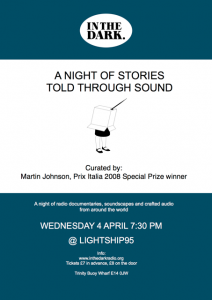 Join us for a night of stories told through sound, by award-winning Swedish producer Martin Johnson.
.
Among Martin’s picks is one of his highly acclaimed features on a maritime theme. Stories of the sea, in the dark? What better venue than deep inside a lightship!
.
Lightship95 is docked at Trinity Buoy Wharf in London E14 – signposted from East India station.
.
Martin won a special award at the Prix Italia in 2008 for his documentary “My Father Takes a Vacation”, which is in a mix of Swedish and English. A version with subtitles is available from Swedish Radio here and is a great listen. http://youtu.be/qKSVAIPs5Rc
View Larger Map