Throughout October and November In The Dark will be rifling through the archives for a very special series of events. A rare opportunity to hear some of the classic radio works that helped shape the language of the creative radio we celebrate today. 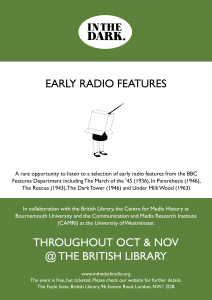 We will be playing you programmes from the BBC Features Department, created in 1945 and led by producer Laurence Gilliam with D.G.Bridson as his deputy. The late 1940s and 1950s were the heyday of the department, which quickly earned a reputation for the brilliance of its output and the heavy drinking elite who were the features producers.

These events are being held in conjunction with The British Library, the Centre for Media History at Bournemouth University and the Communication and Media Research Institute (CAMRI) at the University of Westminster.

We have worked closely with Dr Amanda Wrigley and Professor Hugh Chignell on this series and they have written articles which offer a little background and context about each feature, which can be found here.

Join us for this unique series that will open your ears to sounds past.

16th October: In Parenthesis, written by David Jones, and produced by Douglas Cleverdon for broadcast in 1955. (First produced in 1946.)

30th October: The Rescue, written by Edward Sackville-West with music by Benjamin Britten and produced by Val Gielgud for broadcast in 1962. (First produced in 1943.)

13th November: The Dark Tower (1946), written and produced by Louis MacNeice with music by Benjamin Britten.

When: Doors 5.00pm for a 5.15pm start (so we can squeeze in the whole feature before British Library closes its doors for the evening). Please note each feature is between 70 – 90 minutes in length and there will be an intermission at each event.

Tickets: All events are free, but ticketed. Please book your tickets through the British Library – here.