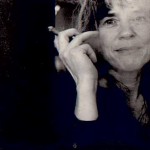 A hymn to Pamela Anderson, the Norwegian economy and all the country’s 11 year old girls. From women’s magazine editors to a young bulimia sufferer, Berit Hedemann’s Little Woman explores the consequences of Norway’s oil-fuelled economic boom on its women. The piece provocatively cuts between its subjects, with a narrating voice that ponders the connections and implications that emerge, as much a subconscious as an authority figure, prompting some interesting questions about the potential of documentary not just in presenting facts but in presenting ideas. The result is a piece that is compelling, funny and, at times, disturbing.